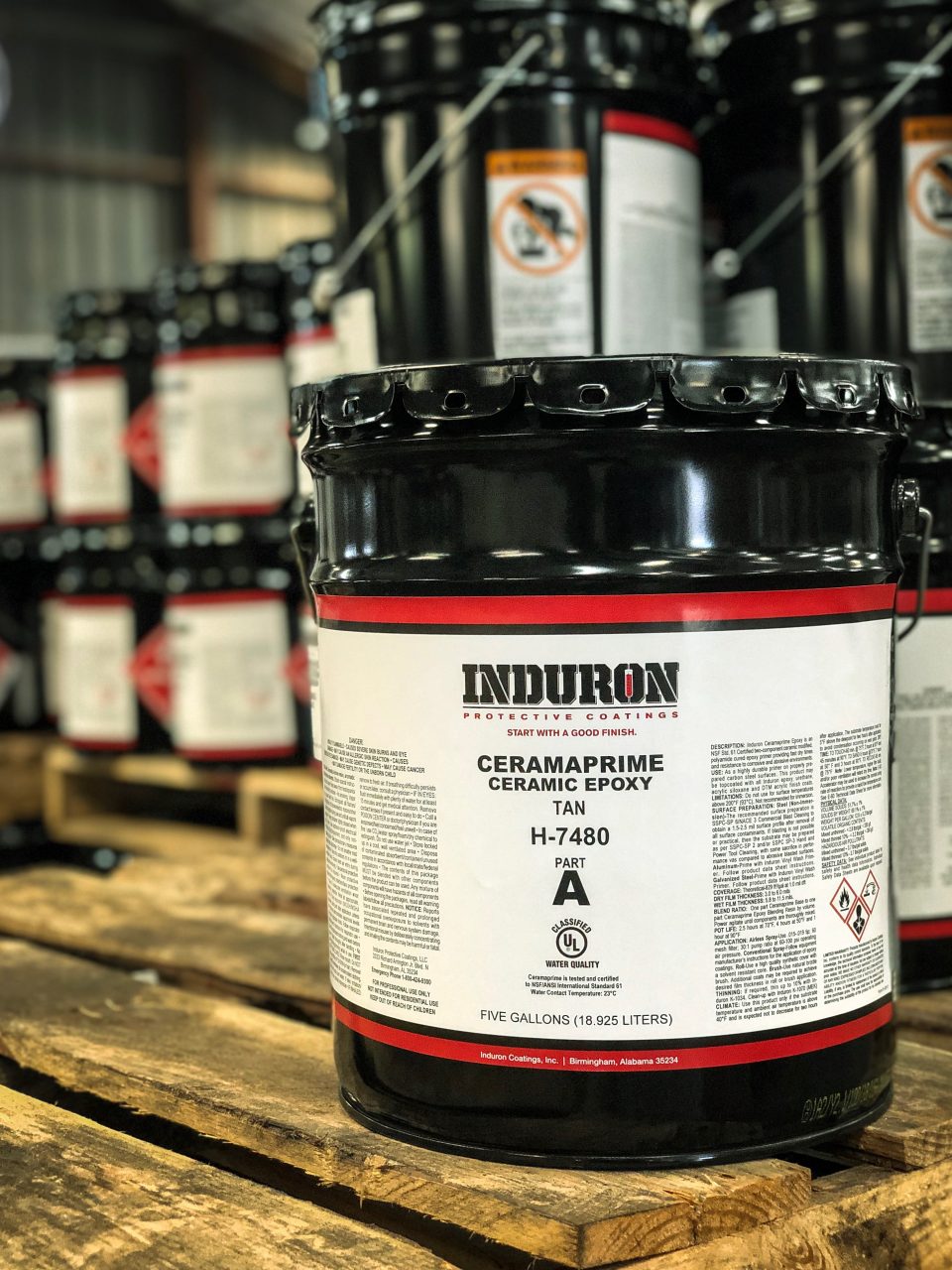 Ceramic epoxy technology has become a staple throughout the United States for the care of water and wastewater assets. Treatment plants, distribution pipelines and storage tanks have all benefited from the unmatched performance of Induron’s thick-film ceramic epoxy products. While these linings can be applied direct to metal, they are often paired with zinc-rich primers, both in the field and in shop environments. With the introduction of Induron’s new CeramaPrime thin-film ceramic epoxy primer, asset owners, contractors and specifying engineers are beginning to “rethink zinc” as the go-to priming option.

Benefits and Challenges of Zinc-Rich Primers

Zinc-rich, moisture-cured urethane primers have dominated the water industry over the past 20 years. The primary salable attribute of these primers to the engineer and owner community has been the promise of longer service lives due to the addition of a “sacrificial layer” of coating in the form of a zinc-rich primer. While these primers continue to perform admirably, the real reason they have gained purchasing support from the contractor community is due to their user-friendly application properties. Zinc-rich primers dry quickly, are applied in a thin film and offer an extended recoat window—all attributes that have been difficult for epoxy technology to match.

Throughout the reign of zinc-rich primers, however, many owners have continued to stick with epoxy primers out of concern for the safety of utilizing heavy-metal-containing products in contact with drinking water and paying nearly double the price per gallon to do so. These assets provide a unique comparison to their counterparts coated with zinc-rich primers. If evaluating the two cases, the most striking contrast is the lack of noticeable difference in performance. After all, if the topcoats applied to either primer are performing well, properly applied primer need only guard against one mechanism of failure: undercutting corrosion where breaks in the film occur. While zinc-rich primers are billed as well-suited for this protection due to their sacrificial nature, this attribute deserves more consideration. Would a layer of disappearing, sacrificial primer truly result in a slowing of undercutting corrosion? If the corrosion cell remains active, does changing the source of its electrons to the coating itself help the coating system stay intact?

Ceramic epoxy has always offered the best defense against undercutting corrosion. The addition of precisely engineered blends of ceramic beads to the epoxy results in a film that has greater adhesion to the substrate than cohesion to itself. In comparison, traditional epoxies with film cohesion greater than substrate adhesion will undercut and expose additional substrate. Tipping this scale stops undercutting corrosion in its tracks. While this performance advantage of ceramic epoxy has been understood for decades, it has never been produced as a thin-film primer to be used as a zinc alternative until the recent introduction of Induron’s CeramaPrime.

With CeramaPrime, Induron has distilled the performance of thick-film ceramic epoxy liners into a thin-film primer. Ceramaprime boasts a 45-minute time-to-recoat, a 1-year maximum recoat window, and low-moisture vapor permeability. This NSF-approved product mitigates undercutting corrosion, offers over 4 hours of pot life, cures hard enough for fabricators to stack steel plate in just 7 hours, and can be easily applied with standard airless spray equipment to both atmospheric and immersion exposure substrates. Ceramaprime also eliminates exposure to reactive metals and isocyanates.

Throughout the United States, Induron is working with specifying engineers to update their specifications to ceramic epoxy primer. This is a welcome change for asset owners who have been paying near double the price per gallon for zinc over the past 20 years. As new epoxy technology like CeramaPrime continues to evolve, many more asset owners, contractors, OEMs, and specifying engineers are sure to “rethink zinc.”