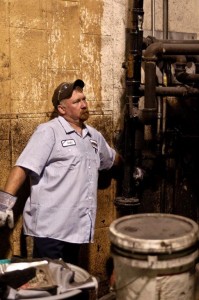 We’re proud to introduce you to the third employee in our “Meet the Induron Family” blog series: Scott Pruitt.

Scott works in the paint making department at Induron, making Protecto 401 – one of the company’s biggest sellers. He also does simple maintenance around the company, making sure everything is running smoothly.

Scott is a second-generation Induron employee – his father retired from Induron after working here for 40 years. Scott has been working here full-time since 1988. “I grew up here,” he said.

“I first met Scott when I worked in the Induron Plant during the summer of ’86,” said Davies Hood, Induron Executive Vice President. “He was one of the ‘young guys’ I bonded with. He’s always been friendly and loyal to me and all those who worked with him. Now that he’s no longer one of the ‘young guys,’ he has grown into a leader among his peers, as exemplified by his position as President of the Local Union. He’s held that position for many years and has worked with me in a way that has been fair for his coworkers.”

Scott enjoys working at Induron. “The guys I work with make the environment very pleasant,” he said. “It’s a good group of guys to be around – from management to the everyday employees. We’re all good about helping each other out. It makes it easy to come to work, especially since we all spend more time here than with our own families!”

Since Scott has been working at Induron for so long, he’s worked with the entire family of Hoods. “I’ve worked for three generations of Hoods – they are a great family. Mr. William Hood was a great guy. He was a people person – you could really learn a lot from him. You’d never know he was the owner of the company.”

“Scott used to have hair so long that he had to braid it to keep it out of the paint he was making; it was so long he even sat on it during his lunch,” Hood said. “I remember well the day he cut his hair. I, of course, commented on the new look, and he simply stated, ‘I had it cut and given so that it could be used to make a wig for a cancer patient.’ He didn’t make a big deal out of it at all. That’s just what he did… and who he is.”

When Scott isn’t at work, he enjoys hunting and fishing. He and his wife, Misty, have two children – Ashley, 23, and Adam, 19.