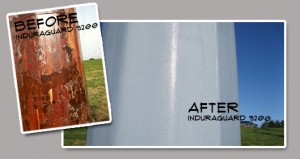 Nowadays, you can’t get used to one gadget before another one comes along that’s better, smaller or cheaper. Technology changes the products we use almost daily, and once you’ve committed to something – say, a laptop or iPod – it’s only a matter of time before what you’ve selected is obsolete.

The technology that makes up the “backbone” of Induraguard 9200 was developed in the late 1950s, and has remained the same ever since. Sure, the technology is ancient by most product standards, such as polysiloxanes, 100% SBV epoxies, or fluorourethanes, but to me, that shows what an amazing product it is. None of those other coatings I mentioned even existed when this tower paint was invented. It has stood the test of time. Of course, I also may be a little biased, because my father-in-law played a key role in its original development.

Induraguard 9200 is used to coat aged, galvanized electrical transmission towers and poles, and its benefits can’t be overstated:

But the biggest benefit of Induraguard 9200 is that there are no surprises. This is the same technology that’s been used since the late 1950s, so we know how it’s going to perform on any project in any environment. Our sales reps have decades of experience in selling it, so you know you’re getting some good ol’ fashioned “Know How” as well as a top-of-the-line product.