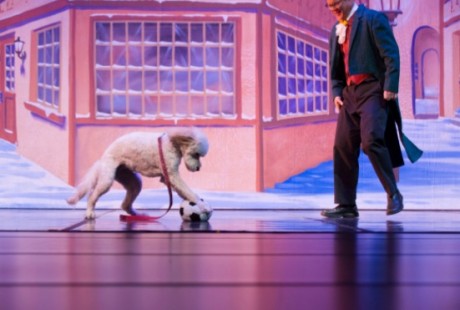 Being a part of the Birmingham Ballet’s annual production of “The Nutcracker” is something I’ve blogged about in the past. It’s always a popular topic, especially since it automatically gives people visions of me dancing in tights. (You’d rather have visions of sugar plums dancing in your head, believe me.) And I don’t actually wear tights, but I do cross-dress.

I am Mother Ginger in a scene where I am playing one of my daughter’s “Mother.” I actually love the comedy break Mother Ginger brings to this traditional ballet. In another scene, I am a “Party Dad,” where I play my other daughter’s father, which is a slightly easier role.

I may provide more comedy than anything else, but my daughters do a fantastic job in their roles. Eliska, my 12-year-old, plays both Jack Frost, who has an elaborate flying scene complete with a harness and cables extended from the rafters and a dancing sheep, which is a new roll with a costume designed and sewed by my wife. Virginia, my 10-year-old, plays a girl in the opening 20 minute party scene AND a Ginger Snap that comes out from beneath her “Mother’s” skirt.

I love all the roles and scenes we’re involved with, and dancing in the show has become a favorite tradition in our family. I love having the chance to spend so much time with my two daughters, being a part of something they absolutely love.

While she may not be quite so passionate about dance, our Golden doodle, Betsy, also gets in on the action during the Friday night production of “The Mutt-Cracker.” This production includes beautiful dancing found in the traditional ballet with something very unique and special brought to the stage by the dogs. Betsy brings A LOT of energy. She’s in the opening scene with me, running around, chasing a ball and just having a blast. The performance benefits the Greater Birmingham Humane Society, and it’s definitely worth checking out.

This time of year is so special for us, since as a father of daughters, I have limited time to spend with them. The camaraderie I am building with them as members of the same team in a show is also really important. I love feeling that bond with my family at home and with my Induron family at work.