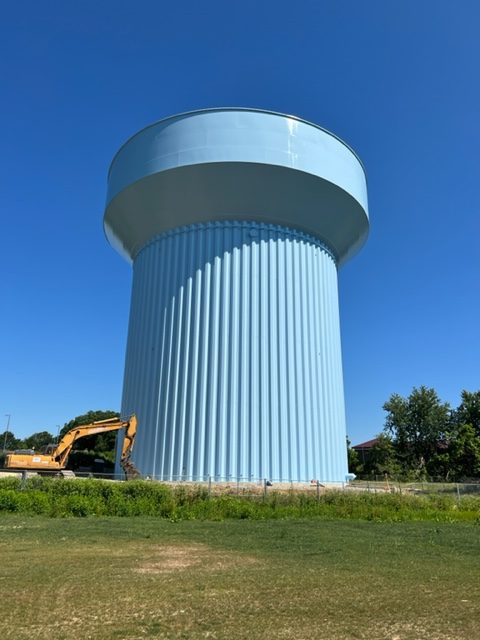 If it ain’t broke, don’t fix it, right? That was the City of Lancaster, PA’s philosophy when selecting a coating system for their new hydropillar tank.

In the mid-1970s, the City of Lancaster built a 7.5 million gallon ornamental ground storage tank. At that time, Tex Enoch, Induron’s current Water Tank Manager, worked for Pennsbury Coatings and specified the paint for the interior and exterior of this tank. When the same tank began to show signs of corrosion in 2020 (nearly 50 years later), U.S. Tank Painting Company and the City of Lancaster contacted Induron to supply the coatings for the repainting project.

The interior and exterior of the tank were primed with Induron’s MC67, a moisture-cured, zinc-rich primer. PermaClean-100, a 100% solids NSF600-approved ceramic epoxy reinforced with Induron’s proprietary ceramic bead technology, was specified as the interior finish coat. The exterior was completed with an intermediate high solids epoxy coating and finished with a coat of Induron’s Permagloss Fluorourethane.

The Chicago Bridge and Iron Company (CBI) was the successful bidder for constructing the city’s new 2.5 million-gallon fluted column hydropillar tank. Under the direction of Dale White and Brian McGlumkphry, CBI fabricated and shop primed the various plates and sections of the tank in their Clive, Iowa shop. The parts were then shipped to the job site in Lancaster.

As with the 7.5 million-gallon tank, MC67 was chosen as the shop primer because of its quick dry and toughness properties. These properties allow the fabricator to quickly prime the plates and sections of the tank. Those plates were then stacked and shipped without fear of the primer being compromised during the stacking and shipping process. The fluted column portion of the tank provides great strength and allows a thinner plate thickness while providing the same strength of much thicker steel. Mumford Bjorkman Associates provided the coating inspection for both the shop priming and the field painting of the tank.

While the sections and plates of the tank were being fabricated, primed and shipped to the job site, the foundation was being completed by Johnston Construction Company.Before the erection process was completed, Matt Paland and his CBI painting crew began the field painting portion of the project. Spot blasting and priming began on much of the accessible portions of both the interior and exterior of the tank.

The interior wet areas (areas in contact with potable water) and the interior dry and exterior surfaces were then spot blasted according to their specified cleanliness. Spot blasting is done on all weld seams, which are purposely left unpainted to facilitate the welding process, as well as on all damaged, irregular, and joined surfaces. Those surfaces are then spot primed with the specified shop primer (MC67). When those areas are completed, a stripe coat of NSF epoxy is applied by brush to the interior wet spot primed surfaces with an additional prime coat of conventional NSF600-approved epoxy primer–in this case Induron’s PE70.  This is a “belt and suspenders” approach to prevent corrosion on these irregular-shaped surfaces by making sure these areas are completely protected. 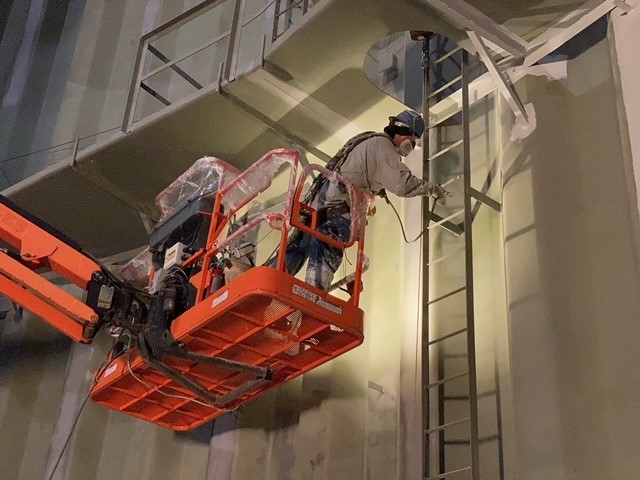 Once the spot priming and the application of the stripe coat is completed on the interior wet surfaces, the finish coat of PermaClean100, a 100% solids, NSF600-approved epoxy tank liner, is applied by plural component airless spray application. Plural component airless spray application is utilized because once the A and B components are mixed, there is very little time before the mixed product begins to cure. The plural component pump allows A and B to be pumped almost to the spray gun before it is forced through a mixing manifold. This method allows the product to cure properly after it is mixed and sprayed. Utilizing a 100% solids epoxy allows the product to be applied without any solvent, which prevents any future solvent contamination of the potable water now contained in the tank. 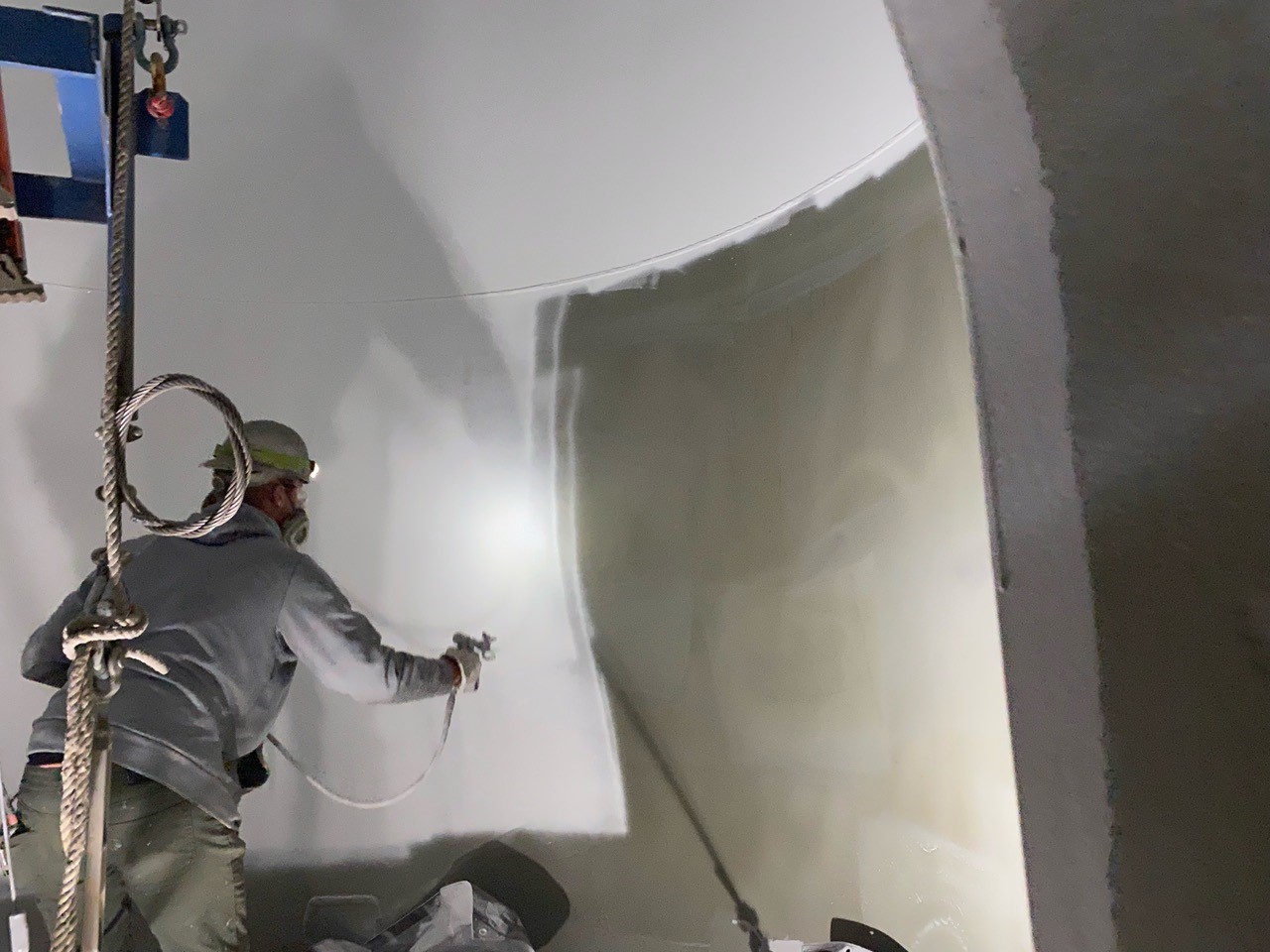 Exterior and interior dry surfaces generally do not receive the extra spot prime coat because the corrosive environment is not as severe. The next step for these areas is the application of the intermediate coat. The interior dry areas of the tank receive a single finish coat of epoxy–generally white for illumination purposes. 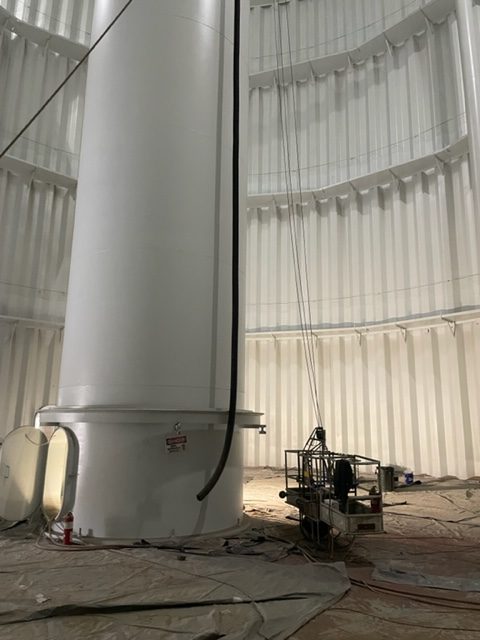 Induron’s Permagloss Fluorourethane was specified as the exterior finish coat because of its ability to retain its color and gloss for 20+ years. Though it is  more expensive than regular urethane,  the cost-benefit differential when compared to the overall cost of the project is miniscule. 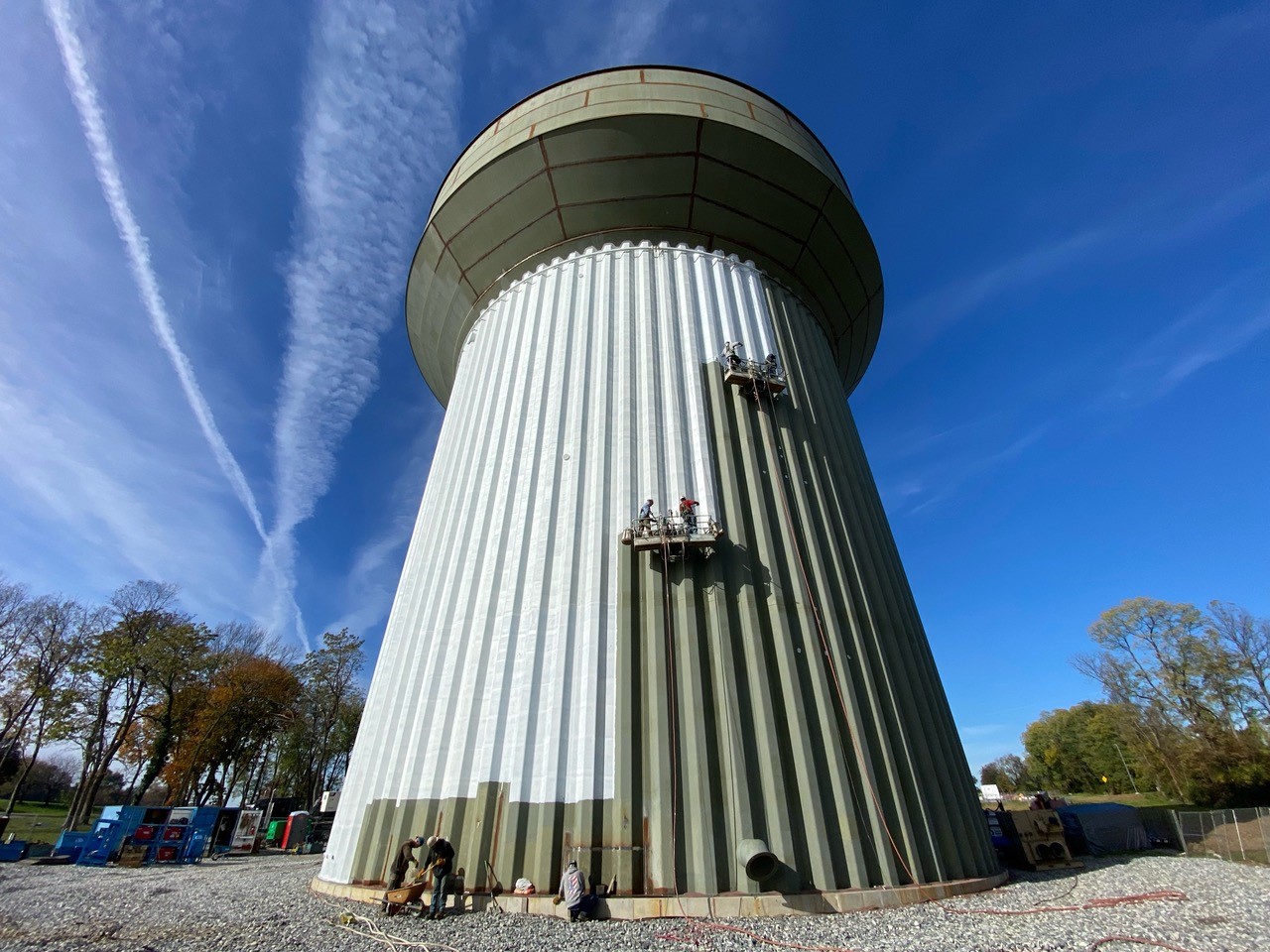 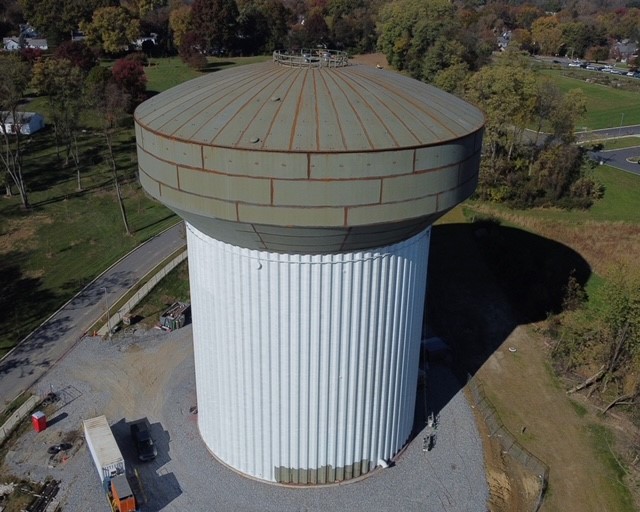 The saying “it takes a village” certainly applies for this project. The City of Lancaster recognized the need for elevated storage capacity in that section of the city and turned to AEERO Engineers to design and size the tank as well as supervise the overall completion of the project. Chicago Bridge and Iron Company was the successful low bidder for the project and provided the fabrication, construction and painting of the 2.5 million gallon hydropillar. The tank was fabricated in Clive by Dale White and Brian McGlumphry, Johnston Construction Company poured the foundation for the tank, and Matt Paland was the painting foreman. All aspects of the project were supervised and inspected by Mumford/Bjorkman and Associates led by Andy Mumford and Mike Catts.