Built in 1914 in Deep Ellum, Texas, the Continental Gin Company includes a cone-top water tower that has since become a landmark to the community. After more than a hundred years in service, the cone-top tower was in need of restoration. Property owner Westdale Management enlisted Goldman Global Arts (GGA) and TankSpek, Corp. to initiate the tank restoration project.

Goldman Global Arts is a creative collective and the curating arm of Goldman Properties. They have pioneered incorporating street art into urban developments around the country in cities such as New York, Miami, and Dallas. Goldman Global Arts commissioned a design by well-known American street artist Shepard Fairey that would transform the water tower into a piece of art for the Deep Ellum community. Fairey painted a mural titled “Cultivate Harmony” to span the 150-foot tall water tower. 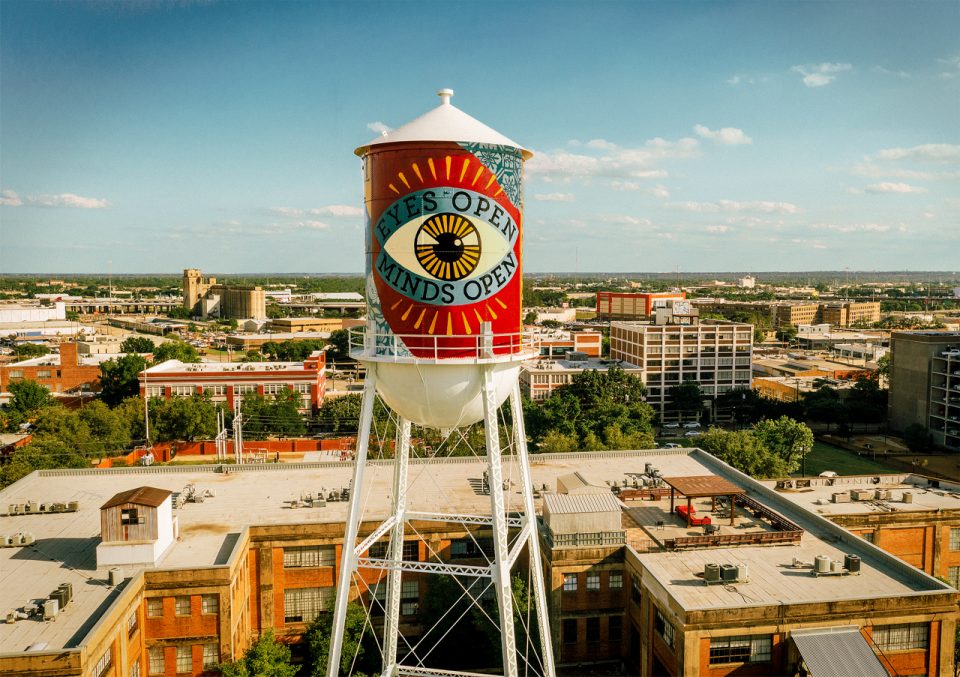 TankSpek, Corp was founded by Nathan Gray and his partner James Brookshire in 2016. Combined, the two owners bring with them over 50 years of experience in tank evaluation, inspection, repair and refurbishment.

“This project drew us in because of its unique challenges just as a structural renovation project with painting involved,” Gray said.

Gray noted that the chief challenge for this project was the liability of property damages.

“The customary concern is safety, but in the case of the restoration phase of this project, these safety considerations are something we face every day and something with which we maintain a perfect track record,” Gray explained. “It was the liability of damaging cars driving by, newly-restored historic buildings nearby, and beautiful parks located directly adjacent to this project that presented a challenge.”

Throughout the duration of the project, TankSpek positioned crews of people hundreds of feet in the air painting upside down and sideways without any means to fully protect paint from going wherever the wind took it. This was all open-air, and directly over parking lots, roads, buildings, parks, people and dogs. Cleaning up could’ve been a real mess! 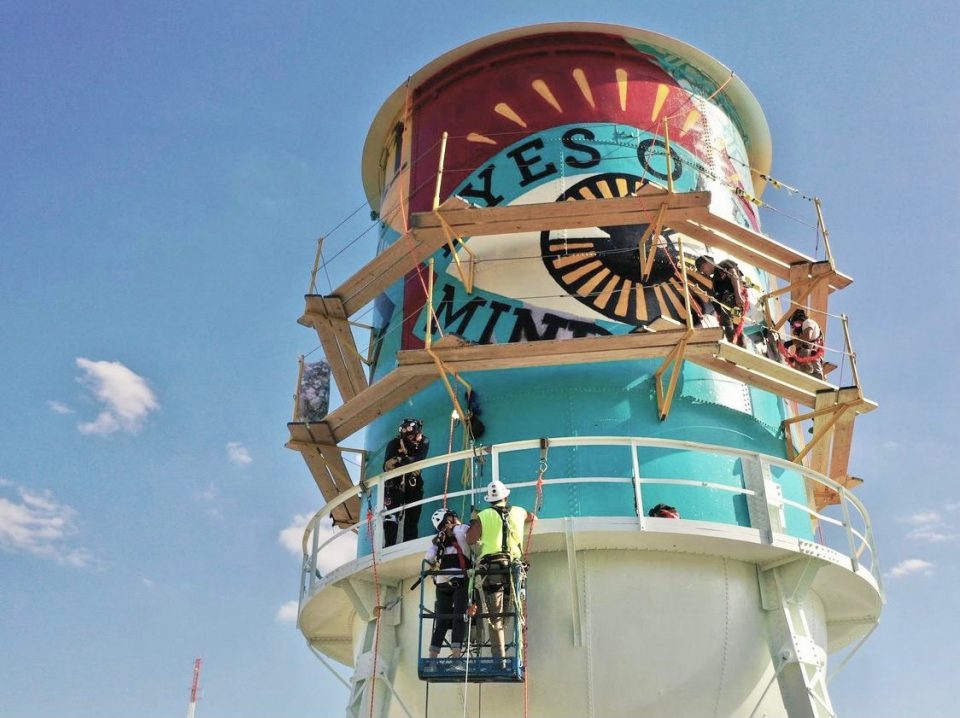 The news of Shepard Fairey being brought onsite was where, logistically, TankSpek’s planning became almost surgical in their approach both to safety and general process.

“My team only had three days to install an incredibly complex rigging system, apply a two-tone backdrop of paint and have our safety team evaluate all installations and safety mechanisms before Shepard and his team arrived,” Gray said. “So certainly, no room for errors, and no contingency days.”

TankSpek involved their safety team in every aspect of rigging down to the specific gaping measurements of plank boards used as scaffolding.

“I could write chapters on how far safety was taken on this project, and this was noted by almost every individual who participated onsite,” Gray said. “Seriously, even Goldman Global Arts’ owners felt comfortable enough with our safety protocol to ride our equipment to the top of the tower!”

Another challenge was the coating process itself. The entire steel surface area of the tank was power washed and hand-tooled to get rid of any old paint that was suspected to potentially release.

“Without any available space for a curtain footprint, there was no way to contain the tank, which left us having to deal with remaining rust,” Gray said. “Without sandblasting, we weren’t exactly turning up white metal.” 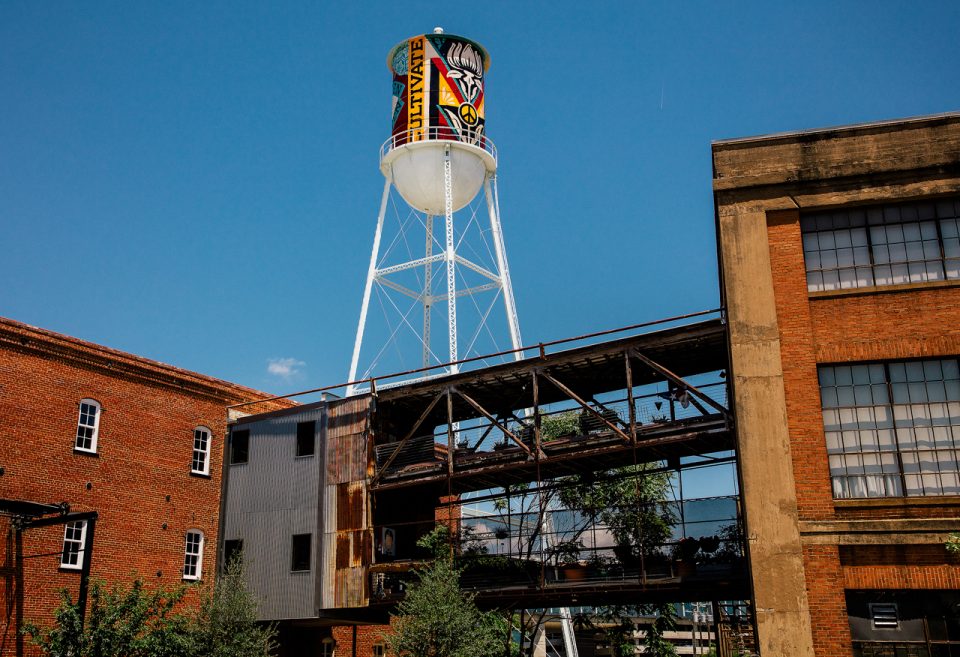 Westdale requested a coatings solution that reduced inevitable damages from overspray. This is when the TankSpek team brought Induron in to supply the coatings system for the project.

“It was our work history with Induron that was a notable key in our decision here. A lot can be said, and should be said, for working with a company who consistently demonstrates reliability and close teamwork over a number of years and countless projects,” Gray said. “We’ve always worked very well with Induron’s team. The folks at Induron tend to demonstrate product knowledge that is at the level of actual hands-on application.”

TankSpek determined that the optimal coating system would need to be brush and roller applied to mitigate occurrences of overspray. Induron recommended painting three layers of protective coatings with each layer being applied directly with brushes and rollers to still achieve required mill-thickness without the inevitability of spraying material all over Deep Ellum.

“We used Induron’s E-bond 100 Epoxy Sealer to do it’s magic and penetrate, neutralize, seal, and whatever other voodoo that material does to handle residual rust on a marginally-prepared surface,” Gray said. 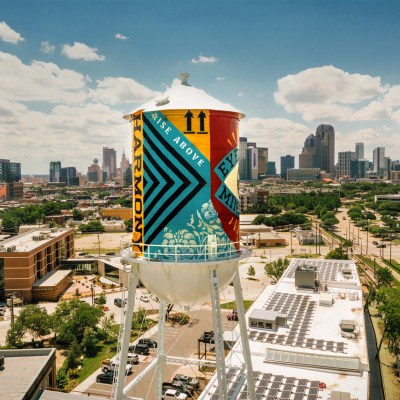 Next, Induron specified a single coat of Induramastic 85 Epoxy as an intermediate coating to build mils and create a powerful barrier against corrosion. Last, but not least, Induron recommended Indurlux 7600 as the finish coat for the project because of its virtually unlimited color range and UV protection.

“The color matching was everything! When we discovered that Induron could use series 7600 to match the artist’s color palette, this became another key that allowed the project to move fluidly,” Gray said. “Using another product would have likely created a timing dilemma due to recoat windows when applying another material over a polysiloxane. Plus, the Polysiloxane looks great! I mean, with the way the colors are laid down, you can just about see this water tower from the moon!”

Induron worked with both the TankSpek and GGA teams to obtain the paint on the artist’s specifications. Shepard Fairey’s team requested 8-10 colors in aerosol form to make a smooth transition for the artist and his team. This is when MyPerfectColor, owned by Jason Shaw and located in Springfield, New Jersey, was brought in to package Induron’s paints into aerosol form.

“A member of the artists’ team notified us during a Zoom meeting that they typically apply their work with rattle cans,” Gray explained. “A member of Wesdale’s team asked how long the artist’s work was projected to last and the answer was something like two years. Paul Powers from Induron suggested aerosolizing Induron’s Indurlux 7600. Not too long after, we had Indurlux 7600 delivered on site in the form of hundreds of rattle cans! ” 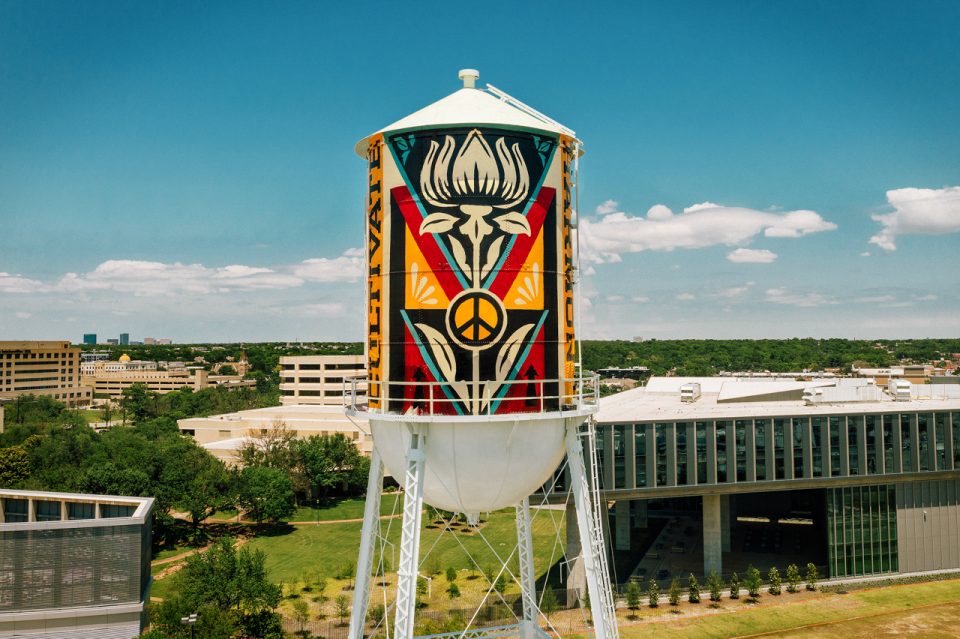 And, just like that, the cone-top water tower in Deep Ellum became a canvas for Shepard Fairey and his team!

“The whole project was full of creative people bringing ideas to the table to make something happen that would’ve been largely written off as impossible,” Gray said.