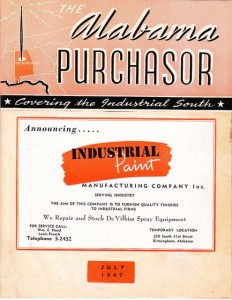 I was four years old when my dad William Hood and Louis Prosch started The Industrial Paint Company, Inc. – now Induron Coatings, LLC – in 1947.  That was a long time ago!

Some of my earliest memories of “the business” (not “the factory” – that fascinated me from the first day I saw it) are dinners at home with paint industry people from faraway places like Atlanta, Louisville, Madison and Washington, DC. I thought they were amazing, the most worldly people I ever saw. My mom and dad seemed to enjoy the relationships and the conversations went on long after my bedtime. Many years later, I discovered what had been going on.

Those guests were members of the National Paint Varnish and Lacquer Association (now the American Coatings Association, or ACA), the Southern Society for Paint Technology (now part of the ACA) and many other industry associations. They were here to discuss matters important to the paint industry and its customers, suppliers, employees and the general public. I think that was a good idea in the 1940s and an even better idea now. There just isn’t any better way to learn about industry issues such as safety, regulations, environmental impact, performance standards, best practices, fair competition and a whole host of other ideas than to talk to others who are as invested in them as you are.

Principals and employees of Induron have been actively involved in, and officers of, more industry associations than I can list here. Our involvement has been good for our industry, our people and the general public. In addition to those benefits, that involvement has also had meaningful benefits for me personally. I made a lot of really good friends in those meetings who are and have been important to me, personally, for a long time. I was able to visit them in those far-away cities (and later, countries) that I heard about as a kid. I learned as much from them as in any other setting in my life. Most of them are retired from the industry now but we still get together for fun and re-living old times (like old guys do).

When I began working “full time” in the industry there were more than 1,000 paint companies in the United States. Today, there are fewer than 100. Our company, Induron Coatings, is still here, still independently owned and still providing reliable and innovative protective coatings, at least in part, because of knowledge gained from the people in those industry groups.