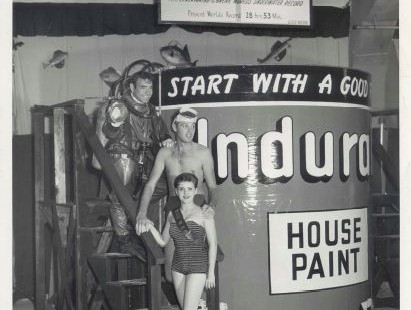 This photo is one of the more interesting ones in our archives. It shows a publicity stunt that took place at the Alabama State Fair in ca.1955. Before scuba diving was popular as a hobby, the Magic City Frogmen set a record for surviving underwater. There was not much scuba gear around at that time, so it got a lot of attention!

In this era, crazy stunts like this were all the rage, and Indurall (Induron’s previous name) had a booth at the fair every year with all kinds of “attractions” to get attention. Mostly these were all dreamed up by my dad who was also one of the founders of Induron, William Hood.

One of his more prominent attractions was a rooster named Sweet Lips. When he crowed, it sounded like “Indurall,” if you listened closely enough. Sweet Lips appeared regularly on the Country Boy Eddie television show that was popular at the time and managed to crow “Indurall” almost every time.

Just for the record, Sweet Lips helped us out in other ways and kept a friend of ours, “Big John” McKinley out of the county jail in Mississippi at a time when black folks were seriously harassed, especially in that state. John was transporting Sweet Lips (in his gilded cage) and some inventory to our store in Jackson when he was stopped by the county police, apparently just because he was black and from out of state. He had the good sense to tell them he had Sweet Lips with him (made famous by the early morning TV show). They ended up letting him go after taking pictures of Sweet Lips posing with them.

Sadly, we don’t have copies of any of these photos or any others of Sweet Lips, but this one of the Frogmen posing at our booth reminds us of that time in our history.