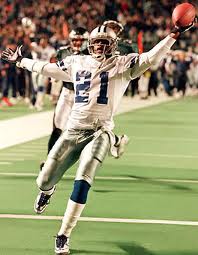 Induron’s Indurabrite Aluminum reminds me of “Neon” Deon Sanders from when he was a sports star for the Atlanta Falcons and the Braves. How could you forget the NFL’s “fastest and most noticeable” player of his era? Deon Sanders was a lock-down corner and punt-returner extraordinaire who beat his competition with speed. He then told them about it with his brash, loud antics.

Induron’s Indurabrite is similar in the fact that it is the “fastest” dry-fall coating that I have ever witnessed. It also has plenty of “BLING” like Deon Sanders since it shines so bright you need sunglasses to even look at a painted surface on a sunny day. Remember all of that gold jewelry…

In all seriousness, the first Indurabrite Aluminum (Dry Fall) field project was done on August 25 in the hot Georgia sun. The tank was in the middle of a town and directly next to the fire department. Two of the legs were within five feet of the gutters, roof and south side exterior wall. The roof and gutters were dark brown and the wall a light tan. The temperature was 90+ degrees, and it was a bright, clear day. The contractor began spraying the Indurabrite Aluminum (Dry Fall) product around 11AM.

The tank was a 75,000 gallon double ellipsoidal tank with lattice and riveted legs that was very old — close to 100 years!

The contractor stated this was the BEST Aluminum Dry Fall product that he had ever sprayed, and he said he had been painting for many years (29 to be exact)! The Utility Service Group Director of Operations — South Region, Rob Weaver, stated that he was very pleased with the Indurabrite Aluminum product.

Upon completion, the tank was so bright that it hurt my eyes to look at it…kind of like Deon Sanders in 1999!