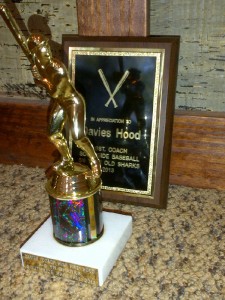 Last Sunday morning I read a great “Guest Opinion” in the Birmingham News about little league baseball titled “Out of the Mouths of Little Leaguers.”

It forced me to think about my own experiences over the past few months coaching the Southside Sharks, a five and six year old coach pitch team that one of my best friends encouraged me to help him with.

When I say “encouraged me to help,” what I really mean is recruited me to pitch to our own team (the worst job in the world) and manage the craziness that can be a little league dugout.

There has been a lot of craziness this year, and I really do mean crazy. The five and six year olds aren’t  really the problem in our league… it’s the other coaches! Not only were we accused of intentionally pitching poorly so our kids could hit off of the tee, but we were also accused of manipulating the game time so the clock ran out on the other team!

As a real baseball fan, I find both of these accusations hilarious. Obviously we Sharks were getting way more credit than we deserved.

But the other teams’ coaches weren’t the only crazies in play. Five and six year old little boys and girls say and do some crazy things. There are several quotes in this article that could have come straight from our dugout, such as:

However, the one quote I actually did hear from the Southside Sharks’ dugout came on the heels of a stinging loss, when a little boy named Jackson said, “The thing that matters is having fun. If we have fun then we’re the real winners.”

I couldn’t agree more. If more things in life were approached with this beautiful attitude, all of our lives would be better. Thank you, Sharks, for reminding me about what is really important: ATTITUDE. Something each and every one of us controls.