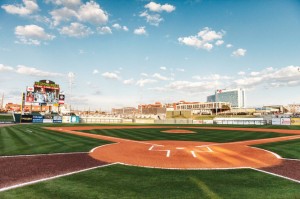 On Thursday May 2, 2013, Induron hosted our Second Annual Family Night at the Ballpark. This is a social event where all employees are invited to bring their spouses, kids and grandkids to the local ballpark. We eat hot dogs, burgers and Cracker-Jacks and really get to know co-workers in a relaxed atmosphere.

Heck, we even flew in our Sales Team from locations as far away as Connecticut, Wisconsin and Missouri! We all enjoyed a little baseball (Go Barons!) and got to see the beautiful new Regions Field. But most importantly we all had a good time.

Something really hit me as I was talking to Chuck Raddin, (Production), who was holding his 18-month-old grandson, and John Bickel (Sales), one of the newest employees of our company. The night was not about baseball at all.

Some of my key memories are:

But the most memorable event of the night occurred late in the evening when one of the other team’s players hit a home run into the Bullpen directly below our section. One of their relief pitchers picked up the ball, quickly saved the home run ball for his teammate and deftly tossed a bullpen ball to Jeremy Lecroy (Production) who was holding Kyler, his 4-year-old son.

Well actually, maybe it IS all about baseball. Specifically the baseball that was given to Kyler. He’ll remember it his entire life. So will I.