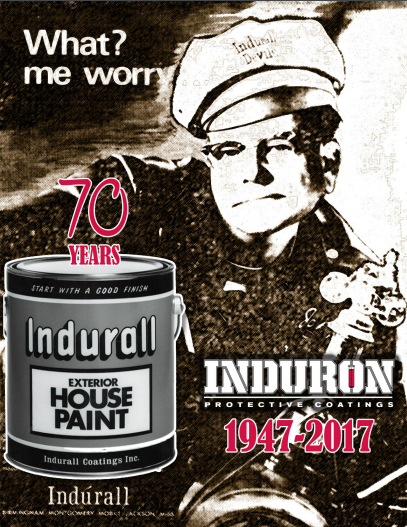 Seventy years ago, William E. Hood and Louis A. Prosch, Jr. started The Industrial Paint Manufacturing Company. These men believed in honor, integrity and serious, honest business. To begin the company, Hood, Prosch and several others invested $32,500 in capital. Prosch was the money and organization man and Hood was the paint formulator and face of the company. The two partners operated out of an office they borrowed from an uncle while assembling equipment to make paint. On May 6, 1948, they rented factory space, purchased equipment and made their first batch of red primer.

Hood and Prosch planned to provide protective coatings for structural steel, which was being used to renew the country’s sorely-neglected infrastructure. They were successful almost immediately and grew the business to a (very small) profit in its first year. The company then began developing architectural paints using the trademarked brand “Indurall.” In 1955, the company owned its first store in Birmingham. When the Indurall brand was sold in 1995, there were 13 stores spread from Ft. Walton Beach, FL to Evansville, IN. In addition to the company stores, dealers were located throughout Alabama and Mississippi. These dealers were profitable sales outlets for years, but by 1970, their sales had diminished substantially due to consolidation in the hardware business. This elimination of small stores was a glimpse into the future of a business practice to come.

In 1965, the company purchased the block between 33rd Street and 34th Street between 10th Avenue North and 9th Avenue North in Birmingham, and we still operate from that location today. When I joined the family business in 1969, sales were roughly 40% stores, 40% production line finishes (primarily baking enamels and steel building primers) and 20% protective coatings. The company was only marginally profitable and debts grew with each new store.

During the 1970’s, the much-needed E.P.A. was established recognizing that the U.S. domestic sewer system was causing considerable pollution via leaking underground sewers. The solution was to stop the leaking by sealing the joints in the sewer pipe. However, this solution resulted in a substantial increase in the corrosive properties of sewage and rapidly destroyed the sewer pipe. In 1976, we discovered the use of hollow ceramic microspheres in coatings to combat this corrosion. This technique among others led to the development of a pipe lining, which is now known as Protecto 401™ and has become “The Standard” in ductile iron sewer pipe lining.

During the 1980’s, the company’s sales grew by 126%, and I purchased controlling interest and took full control of the company. We distinguished the architectural business with new labels that emphasized the Indurall brand. We also created new labels and literature for our industrial products under the trade name “Induron” to emphasize quality and performance. By 1990, sales were about 50% Indurall, 30% Induron and 20% production line finishes.

During the 1990’s, our company developed the technical skills necessary to survive and thrive in a world of high-quality competition and excessive regulation. However, in late 1993, I realized the divergent skills required for the two businesses (high-performance coatings and architectural paint) were more than we could manage. My analysis convinced me that the company had a brighter financial future as Induron than it did trying to be too many different things.

I agreed to Pratt & Lambert United’s proposal to add the Indurall stores and brand to its business, and closed the deal on Oct. 5, 1995. With this sale, the company downsized from about 100 employees to 35 and from several hundred daily invoices to about 10.

Following the sale, we re-invented the company and modernized nearly all of our processes. The factory was reconfigured from making architectural products to making Induron products. We used the company’s history of immediate delivery to service our customers much quicker than they expected. New, high-quality products that meet both environmental concerns and performance demands were also developed. I hired high-quality technical people and my son, Davies, with the plan to transition ownership/management to him.

In the 25 years since the company’s “new beginning,” we have expanded into new territories and markets and will continue to do so while remaining mindful that we compete in a highly-competitive and demanding market. Fortunately, Induron has survived as an independent, family-owned company despite the odds against us. Since 1969, considerable consolidation has occurred as a result of regulation, taxation, customer consolidation, offshore production and powerful competition. The big companies keep acquiring and growing, but we keep solving problems for our customers and servicing them better than they expect and better than the big competitors.

My son, Davies, purchased controlling interest of the company in 2015. With this transition, I can proudly say that third-generation, family-owned Induron Protective Coatings is celebrating 70 years of providing excellent products and high-quality service to its customers. The company is still built upon the same beliefs of honor, integrity and honesty, but it has evolved with a renewed facility, a renewed and expanding sales force, a growing product line and new market opportunities.