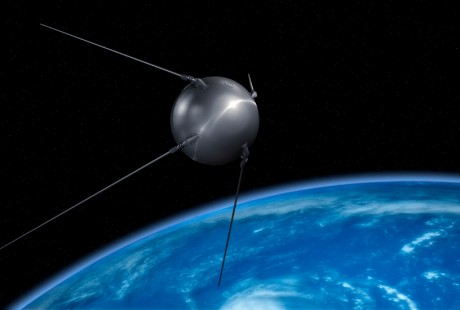 I remember well the afternoon of Oct. 4, 1957 – it was a big time in my life. I was somewhere between Gainsville, GA, and Birmingham, riding in the car with my dad. He had been in Gainsville for the weekend working as a volunteer “corner flagman” at an SCCA amateur sports car race. I was just a 14-year-old kid, amazed at the cars and those who drove them.

On that particular late afternoon, we were listening to the evening news when a strange “beep, beep, beep” sound came over the radio. It was a sound that changed almost everything in my future.

The radio announcer explained that the Russians had launched a rocket that carried a device into orbit around the earth, where it would stay for a very long time with no further “push” and send radio signals until the battery went dead.

I was – and have been ever since – fascinated by all things mechanical. I was also (then and ever since) a red-blooded patriotic American, and I was not going to stand by and do nothing while those Russians were beating us technologically! That night I decided I was going to engineering school. I think many other Americans made the same decision, because, as you know, we developed a far superior and much more sophisticated space program than did anyone else in the world.

The effort to explore space (and develop the military use of space) led to an explosion of knowledge unlike any prior period in history. Virtually everything in life was touched by the technology developed to resolve the challenges of sending people into space and, more importantly, bringing them home unharmed.

On May 5, 1961, Alan Shepard was the first American to go into space and return—Yuri Gagarin, a Russian, beat him by 23 days. Shepard’s Mercury capsule had less computing power than does a present-day RFID tag at Wal-Mart.

The goals of space travel were for us to be “smaller, faster, lighter and smarter.” Those needs drove us into the modern era of computers.

So what does this have to do with Induron? Induron’s predecessor company, Industrial Paint Co., Inc., bought a Univac 9200 computer in 1965. We have been using computers ever since to add value for our customers. They have substantially improved Induron’s productivity in formulating, manufacturing, accounting, billing, purchasing, communicating and virtually every aspect of our business.

So, in a nutshell, Sputnik helped us provide better products to our customers at a lower cost. I’ll bet you never thought of that!