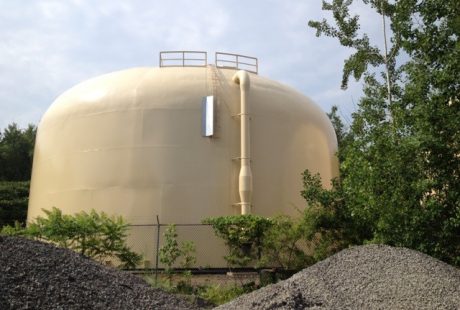 In 2011, Pennsylvania American Water Company put a number of tanks out for repainting work.  Among them were two 1,000,000-gallon standpipes located in Berwick, PA. These tanks were last painted in the late 1980s and were in desperate need of refurbishment. They had an exterior urethane system and an interior epoxy system. The original paint was supplied by Pennsbury Coatings Corporation.

Pennsylvania American Water Company utilizes Tank Industry Consultants (TIC) as their consulting engineer and inspection company.  TIC wrote the specifications for this job and provided full-time, on-site inspection throughout the project. They also conducted the 5-year anniversary inspection, which was part of the specifications for this project. During the project, TIC monitored the quality of the blasting operation ensuring that the surfaces were cleaned to exact conformance of the specifications.  They also monitored and measured each coat applied to confirm that each was applied in atmospherically-approved conditions and to the proper dry film thickness.  After the interior coating systems were applied, holiday detection was employed to ensure that there were no voids in the systems.

The repainting specifications for this project called for an SSPC SP10 “Near White” blast on the interiors and an SSPC SP6 “Commercial” Blast on the exteriors.  Both exteriors were to be coated with a zinc/epoxy/urethane system (MC67/Induraguard/Indurethane 6600 Plus). The interior of Tank #1 was to be coated with a single coat of a 100% solids epoxy coating (Permaclean 100 @ 20 – 30 mils DFT).  Tank #2 was to be coated with a three-coat system consisting of a prime coat of a zinc rich moisture cured urethane and two coats of epoxy (MC67/PE70/PE70).  On both tanks, a stripe coat of epoxy (PE70) was also applied by brush to all interior send seams, angles and joints.
Corrosion Control Corporation (CCC) of Pedricktown, NJ was the successful bidder on the project, and they elected to use Induron’s specified materials for this project.  Kent Webster, the owner of Corrosion Control, selected Induron because of the confidence he has in Induron’s products.  This was especially important in this project because the contractor had to offer a five-year material and labor warranty to PA American. This warranty meant that CCC would have to completely repair any and all defects at their cost after 5 years. Typically, a one-year warranty is offered for projects like this one. Thus, having confidence in the materials selected for this project was extremely important. 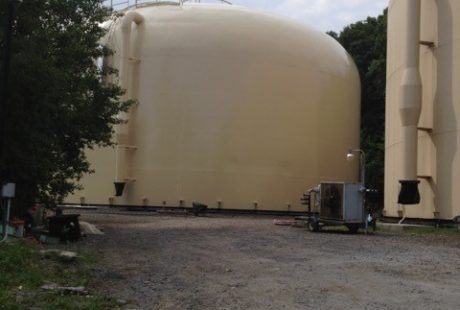 In 2016, the five-year anniversary inspection on each tank was conducted. The tanks were drained, and the interior and exteriors were power washed. The coating systems on each tank performed exceptionally well.  There was no corrosion evident on the tank exteriors and both tanks had less than a square foot of corrosion present on the interiors. The minimal interior corrosion that occurred was in essentially inaccessible areas, which were touched up, and the tanks were returned to service in just one day.

This project demonstrates what commissioning a good specification, quality products and a highly-qualified contractor can accomplish when full-time, qualified inspection is utilized. These tanks will last another 20 years before any extensive repainting becomes necessary.