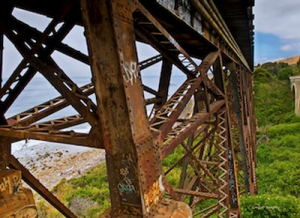 As a general rule, I’m opposed to PACs (Political Action Committees) because of the “secrecy” of their membership and undue influence in our nation’s political process.

However, I am also opposed to a lot of the everyday activities that I regularly participate in. What do I mean? I’m opposed to paying unfair sales taxes on groceries and medicine. I’m opposed to participating in the “free-rider” aspect of volunteer organizations. And I’m very much opposed to the game I grew up playing – football – being deteriorated by the NFL on a year-by-year or even week-by-week basis. But I digress.

But a recent article from PaintSquare has me cheering for (or at least, considering cheering for) the success of the new NACE PAC in Washington.

Look at the numbers: 3.1 percent of our nation’s GDP is spent on corrosion repair and prevention. And it is estimated that up to 30 percent of that cost could be eliminated with proper design and maintenance.

What’s even crazier is that this percentage of GDP spending extrapolates out across the globe, meaning that roughly 3 percent of the world’s GDP is spent on corrosion.

We all know that all steel – even galvanized – will eventually rust. If we elect to defer maintenance painting until that rust is severe (like many in the maintenance departments of organizations on tight budgets are want to do), the cost of painting doubles… or even triples. In many cases, this doubling of cost occurs over a very short period of time, like one or two years. This is true when repainting aged water tanks as well. If a tank is repainted soon enough (before the existing paint cracks and/or corrosion appears), it can simply be pressure washed and overcoated with one easy-to-apply coat. However, if an owner waits too long (often only 18 months too long), that same tank has to be sandblasted, and three coats of material will have to be applied.

These are just two examples from markets that I know. How many other markets are affected by corrosion? Hopefully now you can see the total amount of savings we could incur. Although I do not like Political Action Committees on principle, I sure hope that the NACE PAC is successful. I say this not only as a member of the corrosion resistance industry, but as a patriotic U.S. citizen!