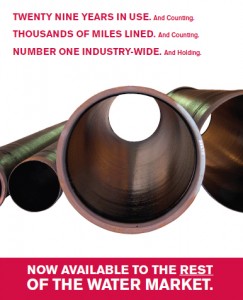 PermaSafe 100 is one of Induron’s most popular, toughest products for protecting waste water treatment plants, but I’ve been asked to share with you a specific example of when PermaSafe 100 proved to be almost too tough for comfort!

I recently worked with a contractor who applied it on a water treatment plant, and while it was approved and looked good, the owners decided that it needed to be removed because it was a different product than was originally specified. They wanted to use a different generic polyurea, rather than an epoxy, so the PermaSafe 100 had to be removed. However, neither the owners of the water treatment plant nor the painter understood just how well PermaSafe 100 bonds to concrete and steel.

So first, the contractor tried sandblasting it off. No luck. Then he tried water blasting it off at 5,000 PSI – that didn’t get it off either. Finally, he had to resort to his last option – a diamond grinder. That PermaSafe 100 was bonded so well, that it damaged the concrete when removed with the diamond grinder!

In the contractor’s statement, the lead person on the project said he’d never seen a coating like PermaSafe 100 in his 30 years in business – truly, a testament to its true strength!

While we hope you never choose to remove PermaSafe 100 from your project, I hope this real-life example shows you just how amazing and tough this product really is. Its four big pluses are: