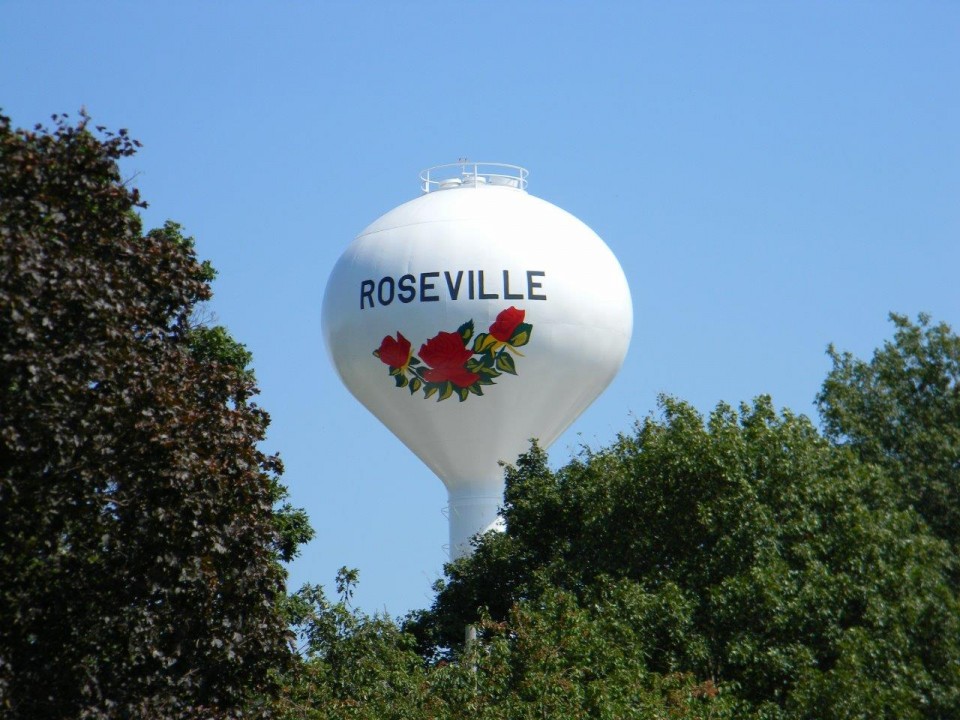 August 7, 2000 was a banner day for the city of Roseville, Illinois. It’s the day Maguire Iron began erecting the new 250,000 gallon pedisphere water tank for the town. It was quite a sight.

On September 12th, the 1st-5th grade children and many town residents were there to watch the 200-ton crane begin to lift the pieces in place. One of the residents, Helen Perrine, told her brother-in-law, a member of the village board, that she sure wished they could “put roses on the new tower.” Be careful what you wish for!

The village told Helen she had three weeks to raise $15,000 to pay to have roses put on the tower. By the end of that time period, she and others had raised $12,045.Thankfully a grant took care of the rest.

Once the money had been raised, Helen was told that the painting contractor had no rose design. Being an accomplished artist herself, Helen sent them a painting with a large rose in the center, a partially opened rose on one side and a rose bud on the other side. When spring arrived in April 2001, the rose was painted on Roseville’s new water tower using her designs. Helen helped supervise the painting, and she and her neighbors were all quite satisfied.

And then……..the rose faded…..and was covered in mold and mildew.

In the spring of 2014, Klingner Engineers was contracted to perform maintenance to the 14-year-old tower. One of the items to accomplish was restoring the exterior of the tank and the rose to its former beauty. By this time, it was very badly faded and molded.

These Induron products will provide many more years of protection and beauty to the Roseville water tower that has been restored to its former glory.